Everything about the Apple iPhone 11 256GB Green

Average scores of the Apple iPhone 11:

In September 2019, American telephone giant Apple launched a new smartphone. This green iPhone 11 is designed for customers who want full Apple functionality, but do not want to pay the highest price for their phone. A number of cool upgrades have also been made to make this device even better than its predecessor, the iPhone XR.

This device is equipped with a faster and more energy-efficient chipset, which gives you better performance for a longer period of time. An extra camera has also been added to the back, which offers extra features, such as a better optical zoom. This particular model is equipped with 256GB of storage space, so you can store even more files and apps.

This iPhone 11 Green features a 6.1-inch screen, making it perfect for watching a movie, for example. Like last year's phone, there's a notch in the screen. This is the space on the front of the device that is reserved for the front camera and the sensors for Face ID.

This green 11 is now equipped with a dual camera on the back. This allows you to capture a wider image than before. This gives you the option to photograph a building, or to capture more people in a group photo.

Do you want to have as many apps, photos, and movies on your phone as possible? Then you're a lot less likely to reach your limit with the generous 256GB of storage space. This way, you don't have to worry about a full phone anymore.

Telecom giant Apple makes their own processors for their phones, and it turns out they aren't bad at all! In fact, this A13 chip is a real powerhouse, allowing you to run demanding apps and games with ease. It's also a little more economical than its predecessor, and you'll notice that in the battery life!

Your smartphone is often full of personal information, and you want to protect it. Apple uses Face ID to securely lock your iPhone 11. This makes you the only one who can access your data, because you need your face!

U.S. manufacturer Apple has always been synonymous with stylish design, and they succeeded again with the iPhone 11. The cool green casing is largely made of glass. This means you can also charge your phone wirelessly.

iOS 13: Perfect for your iPhone

Apple has also released a new operating system for this device, which is neatly tailored for the 11. Navigation is intuitive, making it easy and fast to learn. Use the new dark mode to give your eyes some rest in the evening.

The Apple iPhone 11 256GB Green does not come with a charger. Check whether you have a compatible charger at home. Or order a charger.

Show all accessories for the Apple iPhone 11 256GB Green

Accessories that go with the Apple iPhone 11 256GB Green Show all accessories for the Apple iPhone 11 256GB Green 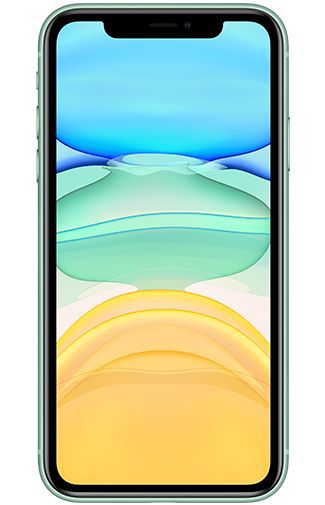