Everything about the Apple iPhone 13 128GB Black

Average scores of the Apple iPhone 13:

The iPhone 13 was announced on 14 September 2021, and it is the logical successor to the iPhone 12. The iPhone 13 has an updated camera module and a new chip making it even faster than its predecessor.

This iPhone 13 is completely water and dust resistant and it features Ceramic Shield for good drop resistance. The cameras are among the best smartphone cameras on the market and especially the ultra-wide-angle lens has improved a lot compared to the iPhone 12.

Plenty of power thanks to Apple's A15 chip

This iPhone 13 is equipped with the powerful A15 chip that Apple produces itself. At the time of release, this is the most powerful chip that Apple has in their phones so all apps run smoothly. The chip is also more energy efficient, which means longer battery life!

The biggest change in the camera setup of the iPhone 13 compared to its predecessor is the ultra-wide-angle lens. It was already great before, but now it's even better, which means you can now capture a super-sized image in high quality. This is especially useful for group photos!

Also, the iPhone 13 has a LiDAR scanner this time, something you only got with the pro models before. This scanner provides an accurate depth-of-field assessment that makes portrait photos look even better. Of course, the main camera and selfie camera are still great for taking photos.

The notch at the top of the screen has become a lot smaller, so it is less in the way and you can enjoy the screen even more! The screen is also brighter than the iPhone 12, making it easier to read in daylight.

Just like the iPhone 12 series, the iPhone 13 has a MagSafe magnet system so you can attach a lot of useful accessories magnetically. Think of a wireless charger that you can easily click on the back, or a card holder for all your cards!

The battery on the iPhone 13 has improved by 18% over its predecessor. Combined with the more efficient processor, this means a longer battery life so you won't have to put it on the charger as often.

The Apple iPhone 13 128GB Black does not come with a charger. Check whether you have a compatible charger at home. Or order a charger.

Show all accessories for the Apple iPhone 13 128GB Black

Accessories that go with the Apple iPhone 13 128GB Black Show all accessories for the Apple iPhone 13 128GB Black 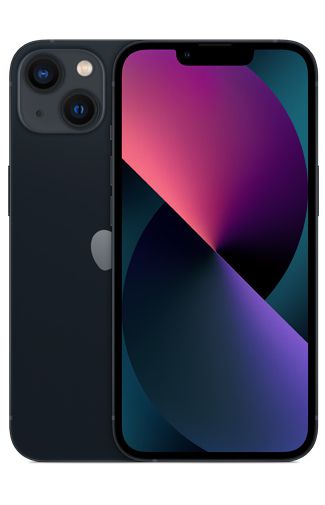