Everything about the Apple iPhone 7 32GB Gold

Average scores of the Apple iPhone 7:

The Apple iPhone 7 32GB Gold is a phone with a lot of great features. Just like the iPhone 6s, the predecessor of the iPhone 7, this device has 3D Touch. This is a really useful feature that greatly improves the ease of use of this smartphone. 3D Touch recognises three different pressure levels and turns them into different responses. With 3D Touch, you can access a preview of certain features of a specific app without having to open the app. This makes the iPhone 7 a really user-friendly, handy phone that is also quick as lightning. On top of all these great specs is the fact that the iPhone 7 is the first iPhone model to have a waterproof casing. Thanks to the IP67 certification, you can now make calls in the rain without having to worry! With 32GB of storage memory, this phone is a great entry-level version of Apple's iPhone 7 range.

Every year, Apple announces a new iPhone that is bigger and better than the previous model. The same goes for the Apple iPhone 7 32GB Gold in 2016. This iPhone has a bigger camera, so the sensor catches more light and lets you take great pictures even when there's not a lot of light. This way, you won't have to use the flash. This 12-megapixel camera is of outstanding quality, so you can record your favourite moments anywhere you are, everywhere you go. Recording videos is also a breeze and are of great quality. On the front of the Apple iPhone 7 32GB Gold, you'll find a 7-megapixel camera. This so-called selfie camera is great for taking selfies, just like the name suggests. However, it is also great for making video calls with FaceTime.

Power at its thinnest

The Apple iPhone 7 32GB Gold has a whole range of really impressive specs. Again, Apple has succeeded in developing a wonderful, user-friendly device with a very sleek finish. Under the hood, you'll find a processor that is as quick as lightning. This processor, the Apple A10 Fusion, was developed by Apple and is powerful enough to easily run the most demanding apps and games. It also makes the iPhone 7 great at multitasking. By removing the 3.5mm headphone jack, Apple created room for an extra speaker that has greatly improved the sound quality of the iPhone 7 in comparison to the iPhone 6S. With the adapter provided by Apple, you can even keep using your old headphones.

Show all accessories for the Apple iPhone 7 32GB Gold

Accessories that go with the Apple iPhone 7 32GB Gold Show all accessories for the Apple iPhone 7 32GB Gold 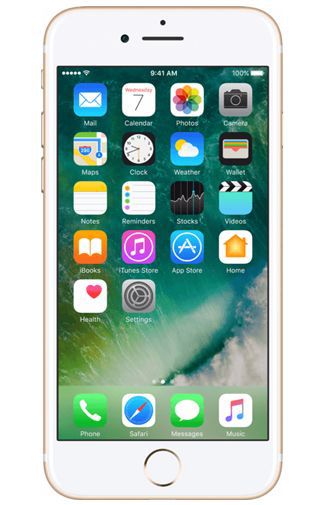