Everything about the Motorola Moto G8 Power Lite

The Motorola Moto G8 Power Lite is the little brother of the G8 Power and has a friendly price. The Lite version also has a large 5000mAh battery as a showpiece, with which you can use the phone up to three days without having to charge in between.

It also has a large 6.5-inch screen and three cameras at the back with various options. With a storage space of 64GB you'll have plenty of space for all of your favourite apps and multimedia. Besides that, the device is suitable for everyday tasks, such as WhatsApp and social media.

This phone is perfect for people who don't want to charge their smartphone too often. With a 5000mAh battery, it will take a very long time before you have to look for a power outlet again. Motorola even indicates that it will take three days before the battery's dead!

Three cameras on the back

On the back there are three cameras, with which you can take good pictures. The depth-of-field sensor blurs the background of your photo, so you can take great portrait photos. With the macro camera, you can zoom in and capture your subjects up close, which is great for nature photos, for example.

The screen has a size of 6.5 inches. Because this device is the Lite version, the resolution of this display is a bit lower than with the regular G8 Power. Nevertheless, you can still watch your favourite series on Netflix. That's when the large battery comes in handy.

Do you have two phone numbers, e.g. for home and for work? In this G8 Power Lite you can place two SIM cards, so you can be reached on both numbers. There's also room for a memory card, so you can create more storage space when you need it!

This smartphone is suitable for everyday tasks. Think for example of internet, WhatsApp, and social media. It is less suitable for demanding apps, such as games. This can lead to glitches and long waiting times.

The user manual is not included but can be downloaded or viewed here: English user manual.

With normal use, we guarantee that your phone will work properly throughout the full warranty period. If something goes wrong, Gomibo.fr and Motorola will make sure to help you out!

How do repairs at Motorola work?

Show all accessories for the Motorola Moto G8 Power Lite

Accessories that go with the Motorola Moto G8 Power Lite Show all accessories for the Motorola Moto G8 Power Lite 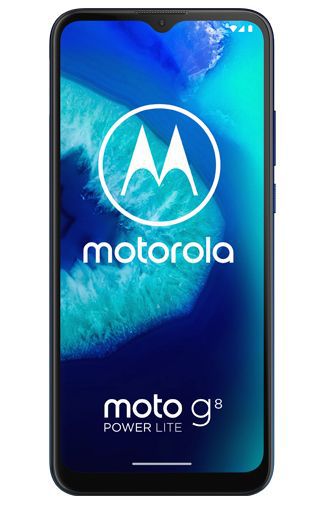