The Nokia 105 (2019) Dual SIM Blue is currently out of stock and therefore not available in combination with a contract.

We're currently unable to stock the Nokia 105 (2019) Dual SIM Blue. Our customer service department doesn't know when this product will be in stock again. We recommend choosing a different product.

The Nokia 105 has been around for years, but this is the new 2019 version. It's still a phone without too much fuss, but it has a new, fresh design. This phone is perfect if you're looking for a second phone for secondary tasks or if you don't want a smartphone yet.

The device has physical buttons, so navigating through the menus and typing texts is easier. The screen is big enough to read a message on or play a simple game such as Snake. Lastly, there's a 3.5mm connection so you can listen to music or FM radio.

Fits nicely in your pocket

While smartphones are getting bigger and bigger, Nokia has chosen a slim design for this blue device. The Nokia 105 (2019) weighs 75 grams and is 14.4mm thick. Thanks to that combination, the phone is easy to carry around.

Navigating though the menus is easy and quick thanks to the physical buttons. You can also easily type in letters, numbers, and punctuation marks. Everything that you do is readable on the 1.8-inch screen. You can also play Snake with these buttons, so let's play!

This 2019 version of the Nokia 105 offers room for two SIM cards, so you can be reached on two numbers in just one phone. This way, you can easily keep private and business matters separate. This could also be useful when you're travelling, as you can use the network of the providers abroad.

This blue Nokia has a battery that lasts for hours on end without needing to be charged. If you don't use your phone that much, you won't need to worry about being near an outlet. You can easily let the phone lay around for three weeks on end on standby mode.

With normal use, we guarantee that your phone will work properly throughout the full warranty period. If something goes wrong, Gomibo.fr and Nokia will make sure to help you out!

How do repairs at Nokia work? 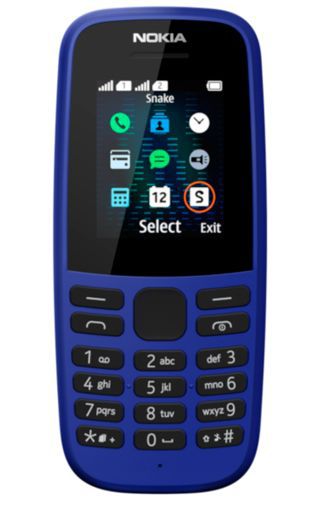