Black | 256 GB
Currently out of stock
Colour and capacity Price

The Samsung Galaxy Note 10+ 256GB N975 Black is currently out of stock and therefore not available in combination with a contract.

We're currently unable to stock the Samsung Galaxy Note 10+ 256GB N975 Black. Our customer service department doesn't know when this product will be in stock again. We recommend choosing a different product.

Everything about the Samsung Galaxy Note 10+ 256GB N975 Black

During the hot summer of 2019, Samsung presented the tenth edition of the Note family. To celebrate this milestone, the South Korean manufacturer won't launch just one model, but two! From these two, the Samsung Galaxy Note 10+ 256GB N975 Black is the crowning glory!

This Note 10+ has a beautiful AMOLED display that covers the front, three cameras with an extra depth sensor on the back, and a 4300mAh battery that delivers enough power for a day of intensive use. You'll also get powerful hardware, lots of storage space, and a beautiful design!

This Black Note 10+ is gorgeous! The front and back are equipped with a beautiful and sturdy Gorilla Glass 6 plate, which won't scratch easily. The front is almost entirely covered by the display, which looks very premium!

The Cinematic Infinity Display has a diagonal of 6.8 inches, which makes it nice and large. This comes in handy when you're watching films and series, or if you're taking notes with the S-Pen! The screen shows razor-sharp images and the Dynamic AMOLED technology ensures beautiful colours and deep black levels.

Ultrasonic fingerprint scanner in the display

The Quad HD+ display contains the fingerprint scanner that unlocks your Samsung phone. This is an ultrasonic version that uses sound waves to make a 3D scan of your finger. This technique is quick and very secure!

Three cameras and a depth-of-field sensor on the back

Samsung chose to add three cameras on the back of this Galaxy Note 10+ Aura Black. The 12-megapixel main camera has a variable aperture that automatically determines how much light the lens uses, so you'll take clear pictures even in poor lighting conditions!

Be creative with the S Pen

A Note isn't a Note without the well-known S Pen. With this stylus, you can mark texts, make sketches, or take notes that are automatically transformed into text. You can also use the S Pen as a presenter when you're showing a PowerPoint presentation, or as a wireless shutter release button.

Powerful chip set and a lot of RAM

Under the hood of this Note 10+ Duos, we find the Exynos 9825, which is a chip set made by Samsung themselves. In combination with the large 12GB of RAM, no task is too demanding for this Samsung phone! You'll be able to multitask without a hitch, play games on the highest settings, or even edit a movie!

Use your Note 10+ as a computer via DeX

You can get even more out of this incredibly powerful smartphone by using DeX technology. You can connect the phone to a DeX accessory, to which you can connect a keyboard, mouse, and monitor. This makes you even more productive, so you really get the most out of the Galaxy Note 10+!

This Samsung Note 10+ comes with 256GB of internal storage space. This is a large amount, so you'll be able to store a lot of apps, photos, and music collections! Do you want to store even more content? You can add a microSD card to your phone, so you'll never run out of space!

Samsung has equipped this device with a big 4300mAh battery that delivers a lot of power. If the battery dies, you can easily charge it in half an hour with SuperFast Charging! You can also charge the Note 10+ wirelessly, which is a bit slower than using a cable.

This Samsung Note 10+ has a so-called IP68 rating. This means that the phone is fully dust and water resistant. That's perfect, you won't have to put your phone in a bowl of rice after dropping it into the water!

Out of the box, the Samsung Galaxy Note 10+ 256GB N975 Black runs on Android 9.0 Pie. This is the popular operating system from Google that you can use right away. Samsung has added its own One UI-skin, which gives a real Samsung look and has some extra apps and features.

With normal use, we guarantee that your phone will work properly throughout the full warranty period. If something goes wrong, Gomibo.fr and Samsung will make sure to help you out!

How do repairs at Samsung work? 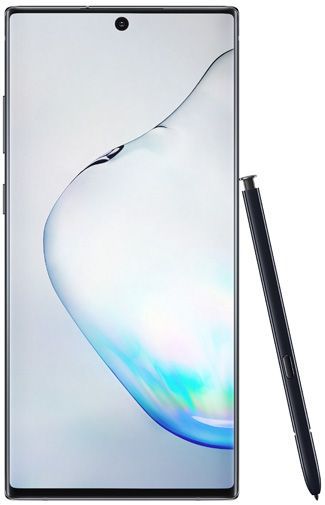